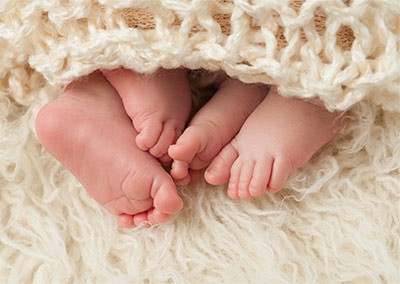 The special facts about multiple fetuses, have been studied intensively. Ιn an effort to identify the effects of genetic and environmental factors, before and after the labor. The most cases anyway, are about twin pregnancies.

The observation of a twin pregnancy is actually the same as a single pregnancy’s, during the first months. Later, it is similar to a high-risk pregnancy observation, and it is dealt with as such.

It is clear that early diagnosis of a multiple pregnancy is vital to its right observation and evolution. Before the vast use of ultrasonography, a great number of twin pregnancies could not be diagnosed, until the time that the labor was imminent.

The decision about the kind of delivery depends many times according to the shape and presentation of the fetuses. The commonest presentation is cephalic/cephalic (50%), followed by cephalic/breech (25%), breech/cephalic (10%) and breech/breech (10%). 5% is a combination.

This decision depends on many factors, such as the gestational week, the situation of the fetuses, the integrity of the membranes, the signs of possible infection or hemorrhage, the number of deliveries and the positions of the fetuses.

A woman with the previous problems of health clearly has the right to become a mother. Definite, with the help of a proper observation from her gynecologist, she can enjoy motherhood like everybody else!